In recent years the Government has put a lot of effort and resources into education; this has enabled, for example, the replacement of the two shift system with a full day of education for State school pupils. However the State education system remains hugely under-resourced due to lack of money and lack of teachers, especially in rural areas – there can be as many as 80 in a class. All schools operate a grade system – Kindergarten, Primary (grades 1-4), Secondary (grades 5-8), and Pre-U (grades 9-12). In theory grades 1-8 run from age 6 to 14, but boys and girls do not usually know their birthdays , and often do not know the year they were born in either. Some of the 14 year-olds in grade 8 classes appear to be in their late teens or early twenties. The State pays for University education – there are Universities in Addis Ababa, Bahir Dar, Gonder, and Mekele, each specialising in different subjects. So a child who is able to make their way through the school system all the way to grade 12 should then be able to proceed to university. 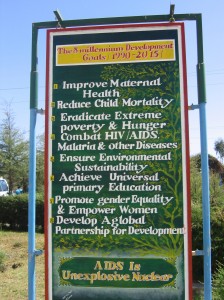 In Ethiopia, two thirds of all children of school age are not able to attend school, but of the third who do, 100,000 are in the Catholic schools, most of which are situated in remote rural areas where government schools are less likely to be found – not least because government teachers are often reluctant to go there. Education in the Catholic schools is of a high standard, and is prized in the local community. Indeed some of the most influential people in Ethiopia have attended a Catholic school. However demand is vastly greater than the number of places available in the schools. There are still many areas where no schools are available at all, and where there are, places have to be rationed, for example by allowing only one child per family to attend school. Modest fees are charged towards the cost of teaching, uniforms and food. Class sizes are around 50 with girls being well represented – most classes are 50/50 and the girls generally seem to do better than boys as they progress. Many girls go on to University. The Montessori system is increasingly in use in the Kindergartens.

Many children walk long distances to school each day with little to eat: the nourishing mid-day meal that the schools provide, if they can, is often their only meal of the day.Where this is not possible schools seek to help in other ways – for instance helping with transport or emergency biscuits for those who are too weak to make it through the day.