The Trust supports two schools in the northern border region of Tigray. The rains often fail here and as a result there are food shortages. There is a large transient population due to the steady influx of refugees from Eritrea. This creates additional challenges for delivering education and basic services and has also resulted in a sharp growth in HIV infection.

Zalambessa is situated on the border with Eritrea in a military zone. The town was destroyed by the Eritreans in 2000 but is now back under Ethiopian control and the inhabitants have been allowed to return. Those with the resources to migrate have done so – the town has become  composed exclusively of the very poor. 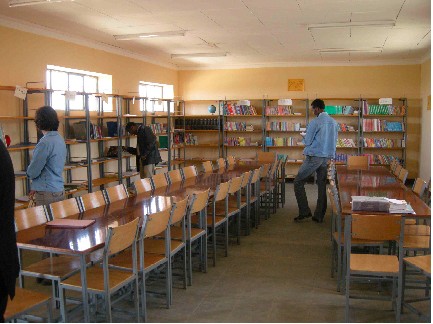 We support the re-built St Peter and Paul School in Zalambessa, which has approximately 380 pupils from kindergarten to 8th grade. It is run by Sister Grace of the St Lucy Filippini sisters. We have helped the school with one-off payments for small capital projects. For example, with the help of matching funds from the Little Way organisation, 55 chairs and desks have been purchased by the Trust for the school. Pupils may have to walk up to two hours to reach school on an empty stomach. The school provides no mid-day meal for its pupils: in an area of such shortages, this would be too divisive. Instead the school maintains a supply of emergency biscuits to help weak children get through the day. In 2009 the Trust paid for bicycles to help children attend from outlying regions. The bicycles are immaculately maintained and will be passed on from pupil to pupil for many years. In such a place, the idea of owning a bicycle for one’s own exclusive use is rare.