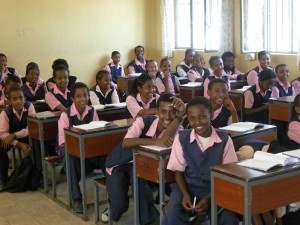 The longest standing commitment of the Jean Grove Trust is to the Blessed Ghebre Michael School in Bahir Dar, a town on the shores of Lake Tana. The school is run by Sister Ayelech of the Daughters of Charity. There are 490 pupils and classes run from kindergarten to Grade 8 (typically age 14). Next door a new school offers grades 9 to 12, and therefore the chance to stay on site up to university level. The pupils are predominantly Ethiopian Orthodox, with a substantial minority of Muslim children, and a small number of Catholics. Many of the pupils have been orphaned by the AIDS epidemic, and some live on the street. The Trust currently pays for the schooling, including clothes, food and books, of 30 of the poorest pupils and subsidises a further 115 with substantial components of costs.  Where financial support is provided the Sisters ensure that it continues through to the end of the child’s schooling. Some of the first students to be funded at Bahir Dar by the Jean Grove Trust have now finished their university education and returned to the school to teach. The picture shows a Grade 7 class in their classroom. 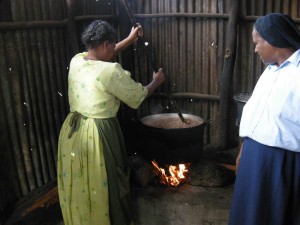 The school provides a mid-day meal to its pupils, and for many this is the only meal they will have all day. It is important to remember also that many of the children walk many miles to attend school or have significant work to do outside school hours. Here the meal is being prepared – on this particular day the grain is wheat – with Sister Ayelech, the headmistress, looking on. The cost of food is a significant component of the school’s budget, and prices have more than doubled since February 2009. 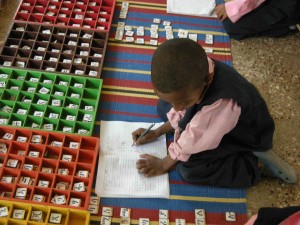 Here you can see kindergarten children learning to read and write using the Montessori Method, which is extremely effective. It costs only £200 to train a teacher in the Montessori Method, and this includes all the equipment – letter blocks and so on – that you see in the photograph. All the kindergartens we support are either using the method already or hoping to be able to send their teachers to be trained. The children all speak three languages from their earliest school years: their tribal language; Amharic, the official language of Ethiopia; and English. They learn to read and write two alphabets, Amharic and Roman.

The children at The Blessed Michael Ghebre School are completely committed to their own education. They know very well that it is their only chance to escape from a life of grinding poverty and they are extraordinarily diligent. Yet from a European perspective the amount of money that it costs to send a child to school in Ethiopia seems incredibly small: the figure for 2010 is only about £7 per month (£86 per year), and remember that this covers not only fees for tuition but also books, clothing and food. The Jean Grove Trust is committed to securing stable, predictable funding for 100 of the poorest pupils at the school: if you are interested in supporting a child at school in Bahir Dar, you can find a Banker’s Order Form under Support Us which will allow you to make regular contributions.