The Trust supports two schools in the northern border region of Tigray. The rains often fail here and as a result there are food shortages. There is a large transient population due to the steady influx of refugees from Eritrea. This creates additional challenges for delivering education and basic services and has also resulted in a sharp growth in HIV infection.

The village of Dawhan is a few miles south of the border with Eritrea, and is being developed as a new district centre. It is a Government centre for administration  and, when applicable, food-for-work distribution  as well as being  the site of a new dam (another development project of the Church)  which will supply water to villages at least 8 kilometres down the valley. The Trust began supporting a new kindergarten here in 2008. As at Zalambessa, we are helping with one-off capital sums for specific projects. Our money has been used to provide school fittings and equipment, to decorate the school buildings with words and pictures, to train teachers and pay the teachers’ salaries. 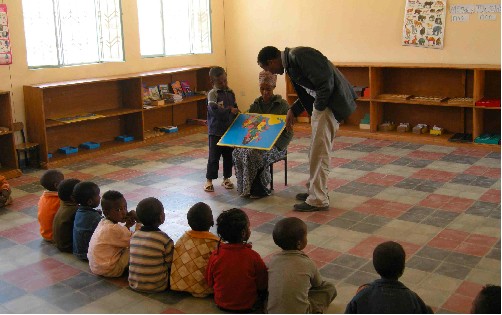 Here you can see a geography lesson in the kindergarten. One child is holding up countries from a world map jigsaw puzzle and the other children are calling out the names of the countries. These children are only six years old. Later that day the same children were chanting in unison, in English, all the parts of the body that they know. Like Zalambessa and Bahir Dar, Dawhan uses the Montessori method extremely effectively.