The Jean Grove Trust Christmas card is now available for purchase from Blackfriars. Packs of ten cost £4.50, with three packs for £12. 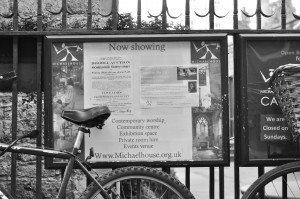 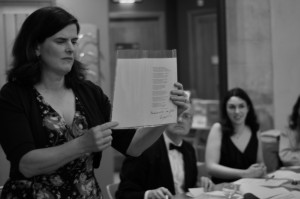 The auction in progressBidding at the Doodle Auction

The Doodle Auction in March was a triumph, with over £7,000 being raised for the Jean Grove Trust. We are most grateful to all of the bidders and doodlers who contributed to the success of the evening. Two officers of the Trust will be travelling to Ethiopia in the spring to visit the schools – on their return, we will be able to update you on the use to which these funds are being put. There are further photographs of the auction on our facebook page. 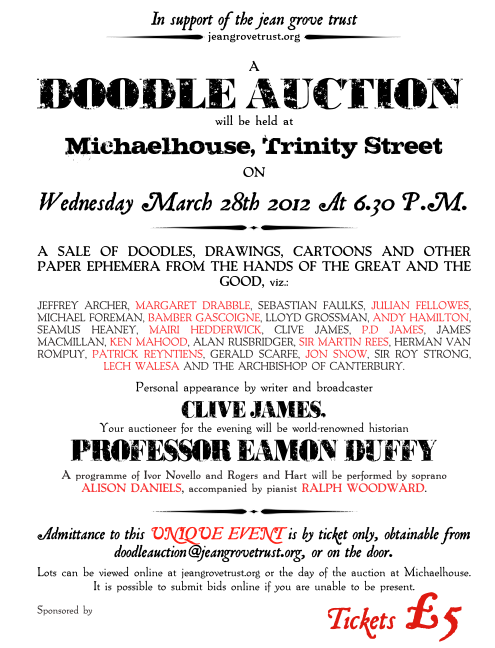 The Jean Grove Trust Doodle Auction will be taking place in Michaelhouse, Cambridge, on 28 March 2012, at 6.30pm. Tickets are now available via doodleauction@jeangrovetrust.org.uk, and for those of you who will be unable to attend on the night, it is also possible to bid in absentia via this address. Bids will be accepted up to midnight on 27 March.

To view the images, visit the Doodle Auction catalogue on our Facebook page. 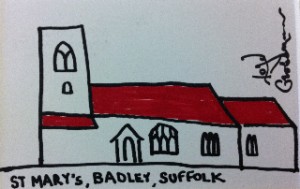 An auction of celebrity doodles and paper memorabilia will be held in Michaelhouse, Trinity Street, Cambridge at 6.30 pm on March 28th 2012. The auction is in aid of the Jean Grove Trust, a local charity which pays for the education of extremely poor children in Ethiopia, supporting schools in Bahir Dar on the shores of Lake Tana, in Zizencho in the inaccessible south and in the harsh border region of Tigray, in the far north.

The doodles and manuscripts to be auctioned include items by statesmen and politicians as diverse as Lech Walesa, Herman von Rompuy and Jeffrey Archer,by literary figures from Sebastian Faulks  and Clive James to Margaret Drabble and Seamus Heaney, by journalists and broadcasters from Alan Rusbridger and Jon Snow to Bamber Gascoigne and Lloyd Grossman. The composer James MacMillan has offered some original bars of music. The novelist PD James has given fascinating insight into her working methods with the donation of some pages of typescript from her latest thriller, “Death comes to Pemberley”, with her hand-written emendations. Cartoonists Gerald Scarfe and the Daily Mail’s Mahood have donated superb drawings, and the Archbishop of Canterbury has produced a rather surprising episcopal seal.  Perhaps of most topical interest will be the drawing by Julian Fellowes of Mary and Matthew finally united at Downton Abbey which is expected to be highly sought-after. All the auction items will be on display in Michaelhouse in the week leading up to the auction, and will shortly be displayed online at jeangrovetrust.org.uk.

It is possible to leave bids by email in the days leading up to the auction, if you are unable to be present on the day: please contact us at doodleauction@jeangrovetrust.org.uk to express interest. The auction itself promises to be a real event, however: it will be preceded by a short programme of songs by Ivor Novello and Rogers and Hart, performed by soprano Alison Daniels accompanied by pianist Ralph Woodward. Tickets for the event are £10 the pair, obtainable by e-mail, from enquiries@jeangrovetrust.org.uk

The Trust is a small Cambridge–based charity, founded in 1999 at the instigation of the late Dr Jean Grove, geographer and Fellow of Girton College Cambridge. The Trust supports directly four schools in different parts of Ethiopia, paying for the clothes, food, books and fees of the poorest children. The Trust has no overheads or administration costs: every penny that is donated goes to the schools, and direct contact between the schools and the Trust ensures that the money is directed to where it is needed most. 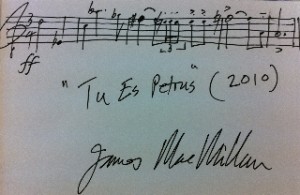 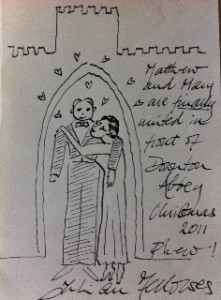 Our Treasurer, Christopher Stevenson, died in July after a six-month illness. Christopher was a well-known face in the Blackfriars congregation, and around Cambridge generally, where he was for many years the Bursar of New Hall. He worked tirelessly for the Trust, and was an avid and delighted fundraiser. His beaming face as he counted the collection after an appeal was a sight to behold. He will be very much missed. A memorial service was held in Blackfriars in November. We would like to thank many of you who have sent donations in his memory, and our  thanks also to Krystyna Stevenson, Christopher’s widow, and their son Greg, who asked that donations be made instead of sending flowers. The Trust has received over a thousand pounds in Christopher’s memory, for which we are most grateful. 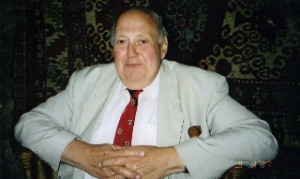 Supporters of the Jean Grove Trust will be glad to see these recent updates from our colleagues in Ethiopia.
Abba Musie Gebreghiorghis writes as follows:
Thank you for your most appreciated Christmas greetings and best wishes. Please accept mine also. Thank you also for the updates of the initiative undertaken on your part to support our children in Zizencho. The latest development in Zizencho is that the Bethany Sisters have opened an aditional kindergarten in Arequit and are expanding it to become a primary school. The progress the children are making in school is incredible. On parents’ day everyone was astonished at the progress the children had made within such a short period of time. Similarly in Zizencho the Sisters have built additional classrooms and the standard there also is improving tremendously. The best way we can help a society to be self supporting is by provinding it the skill to manage its own life and that is possible through education. To focus on education is ensure sustainable progress at all levels. Thank you for making this possible through your well planned initiatives.
At the present moment we have in Zizencho 478 students from kindergarted to eight grade and in Arekit 180 children. All of them get free education, uniform, stationery, medical care and one meal a day for kindergarten children. Together with the school the Sisters run also a clinic which is of great help for the local population to reduce  child and maternal  mortality in birth. Everyday the Sisters visit from eighty to one hundred and fifty patients in the clinic.
We are well aware of the challenge of economic crisis. Still you are brave to keep up the work hoping for a better future. We can only pray that your efforts are rewarded with success.
Once again Merry Christmas and a very happy New Year.